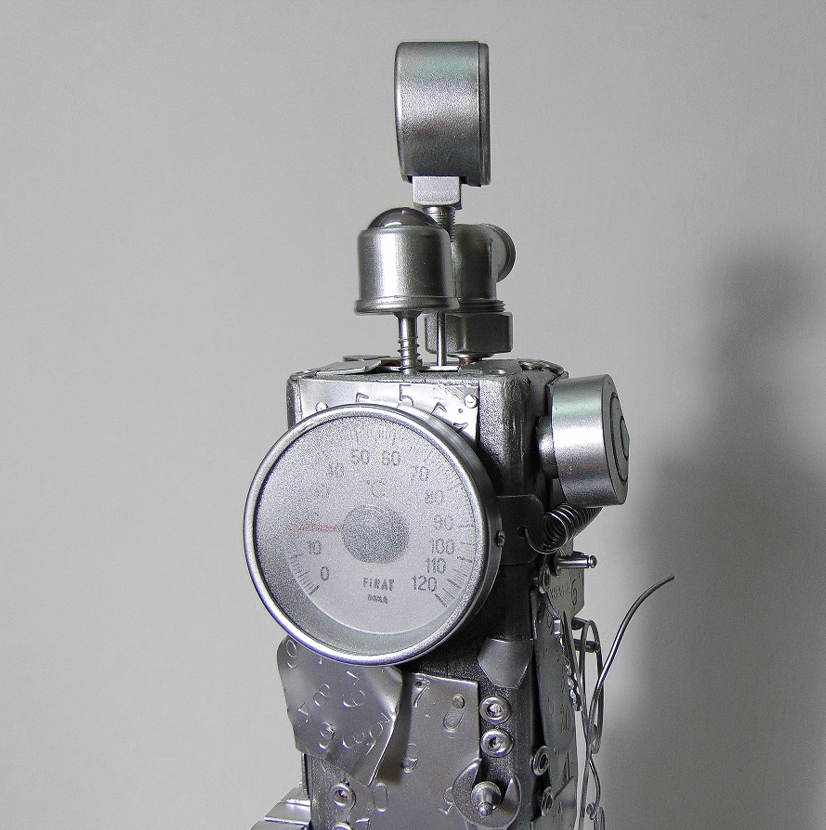 He is a sculptor and painter. He lives and works in Rome. He loves to use all the techniques and materials available to create his works, with a preference for metals. The artistic expression comes from a strong inner need and is revealed through a rigorous, almost Gothic style, ‘between flame and steel’. It ranges from expressionism to symbolic and oneiric fantastic, to POP, without closing in any current. The human figure is dominant. The present time and its complexity are the issues investigated. 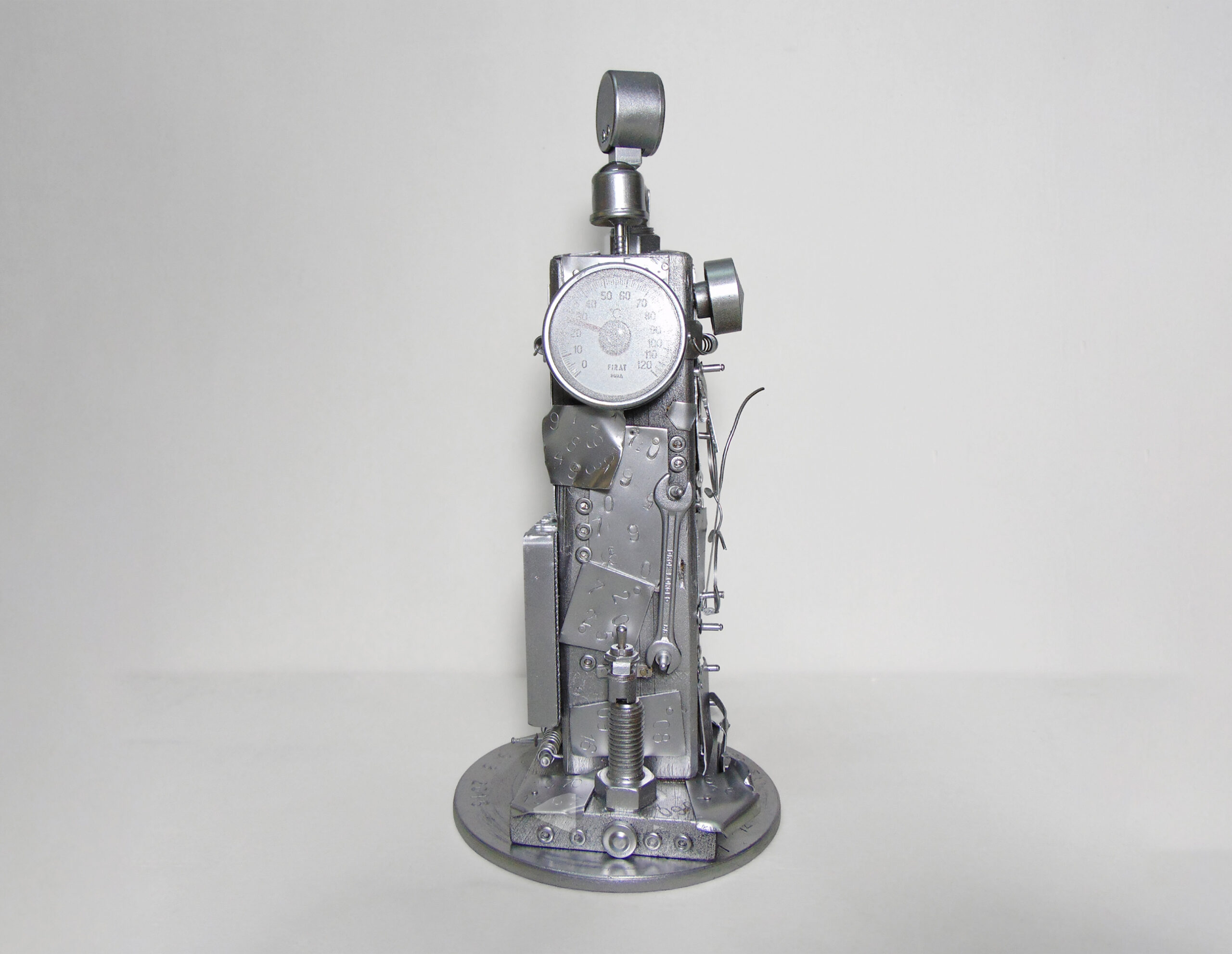 Perhaps the idea of the device as a metaphor for internal mechanisms offers the first approach to the work of the Roman artist Marco Cavalieri. The artist himself states that it is characterized by a vaguely dadaistic and conceptual principle, of personal accumulations of memories and symbolic objects, introducing into the work also manometers, thermometers, keys and perhaps measuring instruments of the physical state of things. At the base of his work there is therefore the idea of a technique interpreted romantically, which gives to the dynamics of its structure (revolving on its vertical axis) a meaning that goes beyond the purely functional datum and refers to a more mysterious logic, involved with the same technology of human activities. And it is precisely on the aluminum, which covers the work and is its outer shell, so to speak, that the artist imprints its cryptic foundational signs. It is the aluminum that dampens the first impression of a purely totemic structure, and it gives back a sense of calmer and more sober intimacy to the artifact. 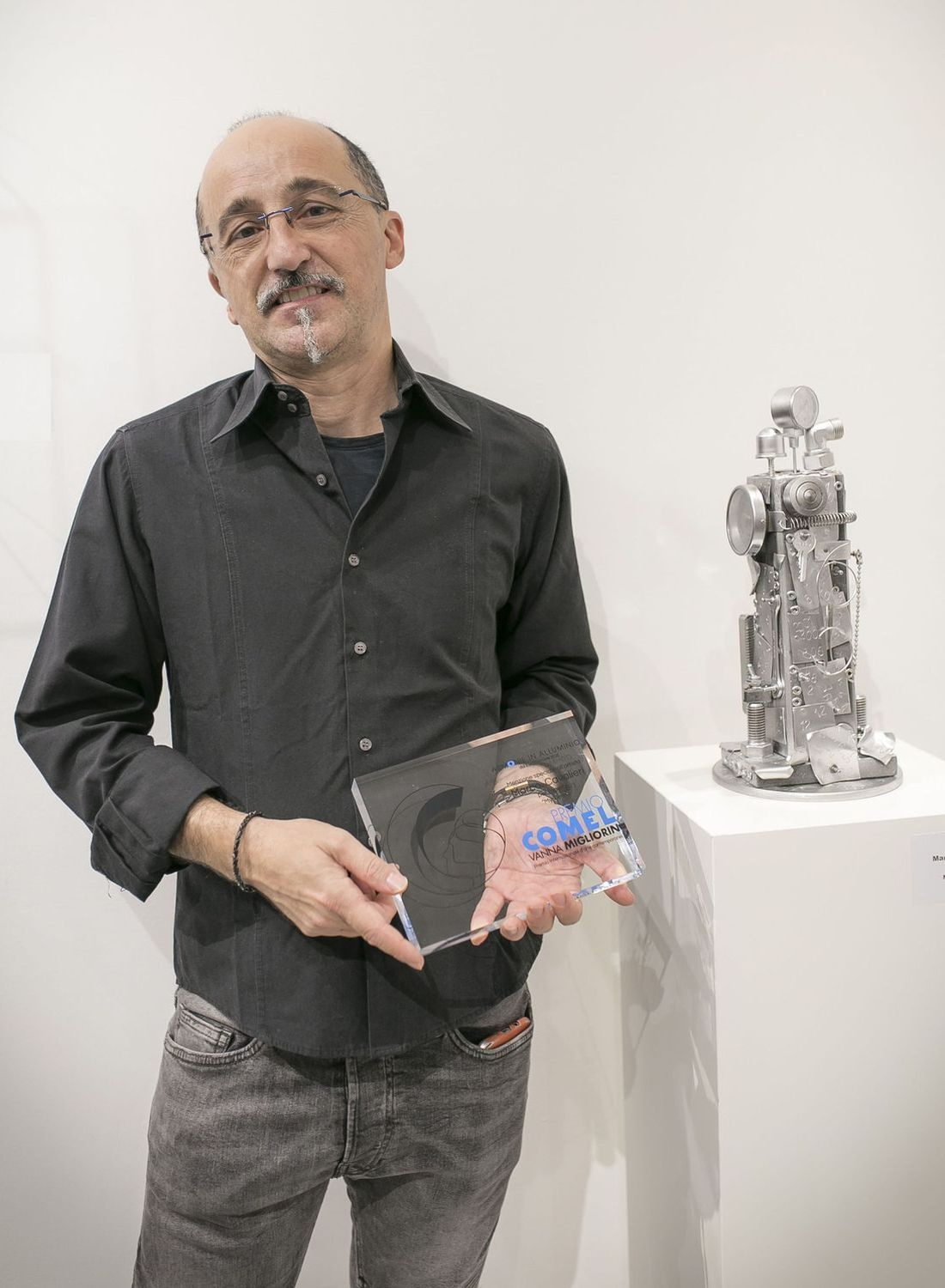 “Marco Cavalieri‘s work My Time, where the original assembly of objects and plates is engraved in aluminum to configure an imaginary rotating device, packaged in the manner of totems. It refers to the idea of internal mechanisms of life, between memory and time. “

The project of the work can be changeable, even in the implementation phase, sometimes it happens to me to change and also distort its content; this is primarily determined by an intuition of the moment.

After attending Liceo Artistico (Art High School), you chose the path to Architecture. What were your art idols during your studies and what were your goals?

Architecture fascinated me purely for the Design aspect, especially in the first development of the creative phase; unfortunately, I soon realised that the margins of action regarding imagination and creativity were reduced, tightened by structural, technical problems, laws, urban planning restrictions, etc.
I was inspired by Louis Kahn, for his minimalist rigour and his almost gothic vision and his understanding of buildings.

Currently, in your works, various currents are reflected, but you prefer not to be framed in any of them, often combining techniques and models to obtain a wholly original and updated picture.

What do you want to represent of the present that surrounds us?
In my works, I communicate my vision of reality and the relationship and correlation between people. The creation links to a mood of the moment that suggests the initial idea.

Devices, mechanisms, mechanical parts capable of joining different objects; it is mechanization that reflects the technological man of the present time. And yet, in the accumulation of the objects you choose, there is a determining factor: memory — past and present merge. Wisdom and superfluous (the object can be redundant, wasteful), they are two so different temporal moments and yet they can be similar. What links the elements of your works?

Memory is the cultural baggage of everyone; it also forms character and determines its uniqueness. In the realisation phase, I use various materials because each of them possesses an intrinsic physical characteristic and a historical reference. I usually form a steel skeleton and then fill it in like a dress.
The various materials are subjected to the creative purpose; the material is always a means of expression; it is never the end or only an ornament.

Your sculpture, My Time (2018, aluminum, plastic, wood), was selected for the VII edition of the COMEL International Award and received a special mention from the jury (made up of the art critics Giorgio Agnisola, Andrea Baffoni, Lorenzo Canova, Ada Patrizia Fiorillo, and the manager Maria Gabriella Mazzola). This was a major achievement. The critic Agnisola says of your work: “[…] it is precisely on the aluminum, which covers the work and is its outer shell, so to speak, that the artist imprints his cryptic foundational signs. It is the aluminium that dampens the first impression of a purely totemic structure, and it gives back a sense of calmer and more sober intimacy to the artifact.” How was this small intimist totem born?

My Time is perhaps the most intimate and personal work I have done; here the time is represented in its flow. Over the years, we clothe ourselves in our lives, our experiences, especially; here mine is described, and the dates engraved on aluminium are part of the essential and personal moments of my life. My Time is me. 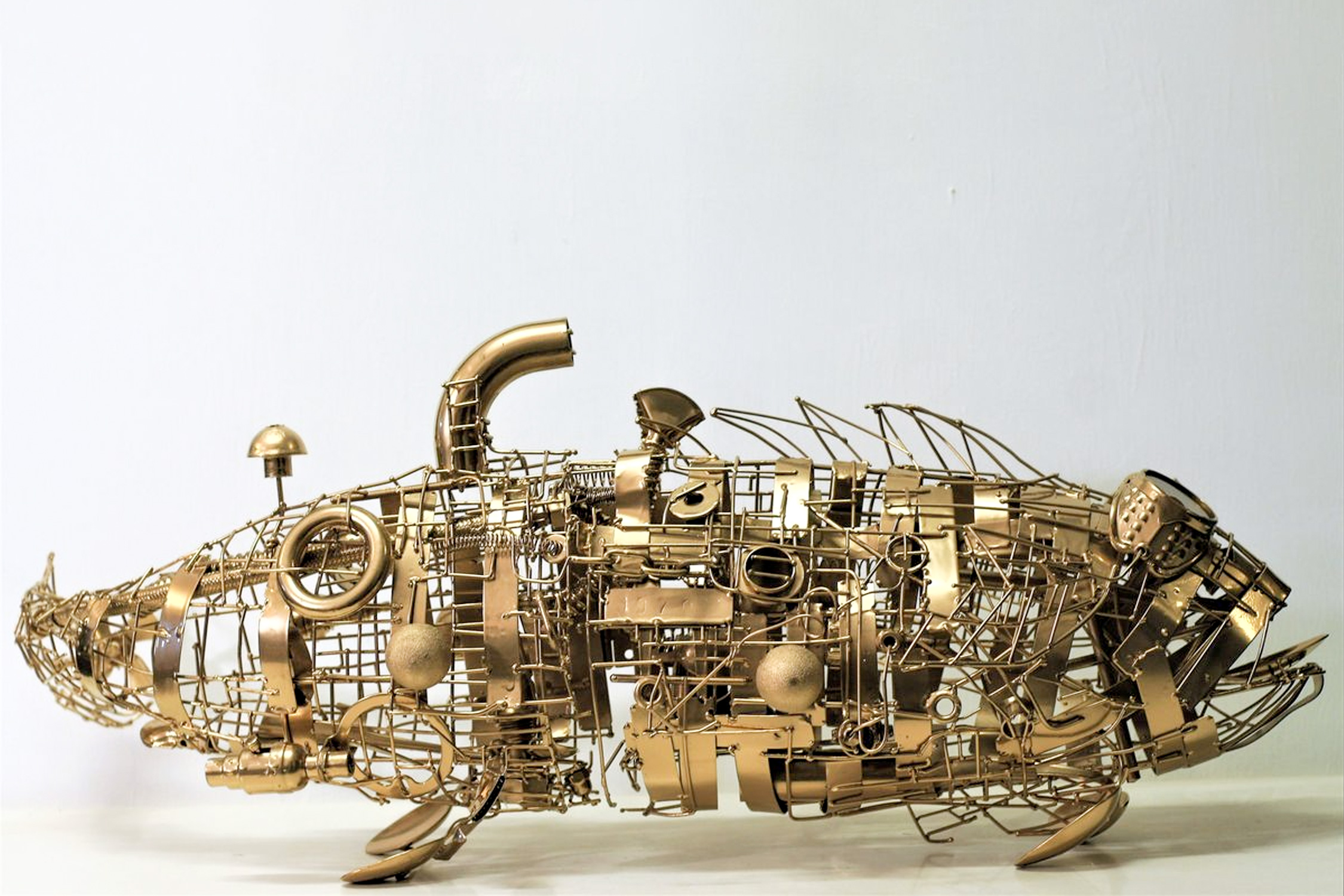 You exhibit in collective and personal exhibitions since 1996, especially in Rome, and also in other important Italian cities of art. Which exhibition do you remember with a particular interest for the teachings you received and the comparison with other artists?

Recently I have been able to participate in several international awards, not least the COMEL Award, where I was able to appreciate the excellent selection of works and the organisation in general.
Having said this, this year the Premio Arte of the namesake magazine, organized by the Mondadori Group, which took place in Milan and saw the finalists exhibited in the magnificent halls of the Palazzo Reale, particularly involved me and filled me with satisfaction, also because it was the first year I attended this prestigious art event. On this occasion, I presented the work Gold Fish, a large gold-painted undersea fish, which can be opened in half and inspected inside.
It was a creation of pure fantasy and a particular design commitment.

The time of welding is probably one of the most important in the construction of the work. Fire creates the bond, as in an alchemical process. The same that you like to propose in the lamps (the light evokes the warmth and the fire of the blacksmith-craftsman). Metals bend to your will to follow your project. Do the metals themselves ever guide you, changing what you planned?

Welding coincides with the moment of creation, the moment of highest concentration, the most fascinating, the moment of birth and transformation of one material into another, the chrysalis that becomes a butterfly.
The project of the work can be changeable, even in the implementation phase, sometimes it happens to me to change and also distort its content; this is primarily determined by an intuition of the moment.

What are the works created so far that you feel best represent you?

The works that most represent me are those in which the presence of the symbolist synthesis component is strong, where the message transmitted to the outside is clear and strong.

At the moment, apart from the various art prizes I have enrolled in, I am dedicating myself in particular to a project for a solo exhibition, on the theme of toys, creating works by exploiting every possible material and where the fantasy really has no limits, where colour must provide joy in the eyes of the beholder. Some of these works will be exhibited in spring, as anticipation, in the halls of the Museo del giocattolo, at Palazzo Rospigliosi, Zagarolo (RM).