He was born in Greece, he graduated in Architecture from the Royal College of Art in London, where he still lives and works. He has exhibited in solo and group exhibitions all over the world: from Europe to the Middle East, from China to India and the United States.

According to Niko Kapa, Art is a way to represent the intangible through the tangible, in other words, a means of expressing emotions, thoughts and sensations through artworks. He combines his soul as an architect with that of an artist, engaging in a practice that attempts to model space rather than materials. The act of shaping the various materials allows him to explore the inner and outer world in a circular sequence that makes art a powerful means of expression and social interaction.

You are an internationally renowned architect and also as an artist you collect acclaim and awards all over the world. What is the difference between Niko Kapa architect and Niko Kapa artist? Does your approach to art change from the one to architecture?

Through my work I try to find points of contact between diverse fields. From my perspective physical works are nodes in the ongoing activity of knowledge production, underlining the experimental nature of art and architecture. One of the great virtues of art is its potential to let us see the world through different eyes, enabling us to keep moving and push the boundaries of knowledge. I believe that art is not exclusive or limited in a closed sphere but reaches beyond. It can engage with architecture, science and design offering ground to be explored. Investigating architecture’s ability to communicate cultural content, I developed specific attentiveness in interface of traditions of craft, materiality, pattern and the ways material effects can be tuned to human occupancy. Following a creative approach lead by experience rather than a fixed discipline, I experiment with a variety of materials, processes and environments in fields of interest ranging from architecture, industrial design, installation and art. Defying conventional classification of design disciplines, their interwoven nature provides a platform for further research and dynamic experimentation. 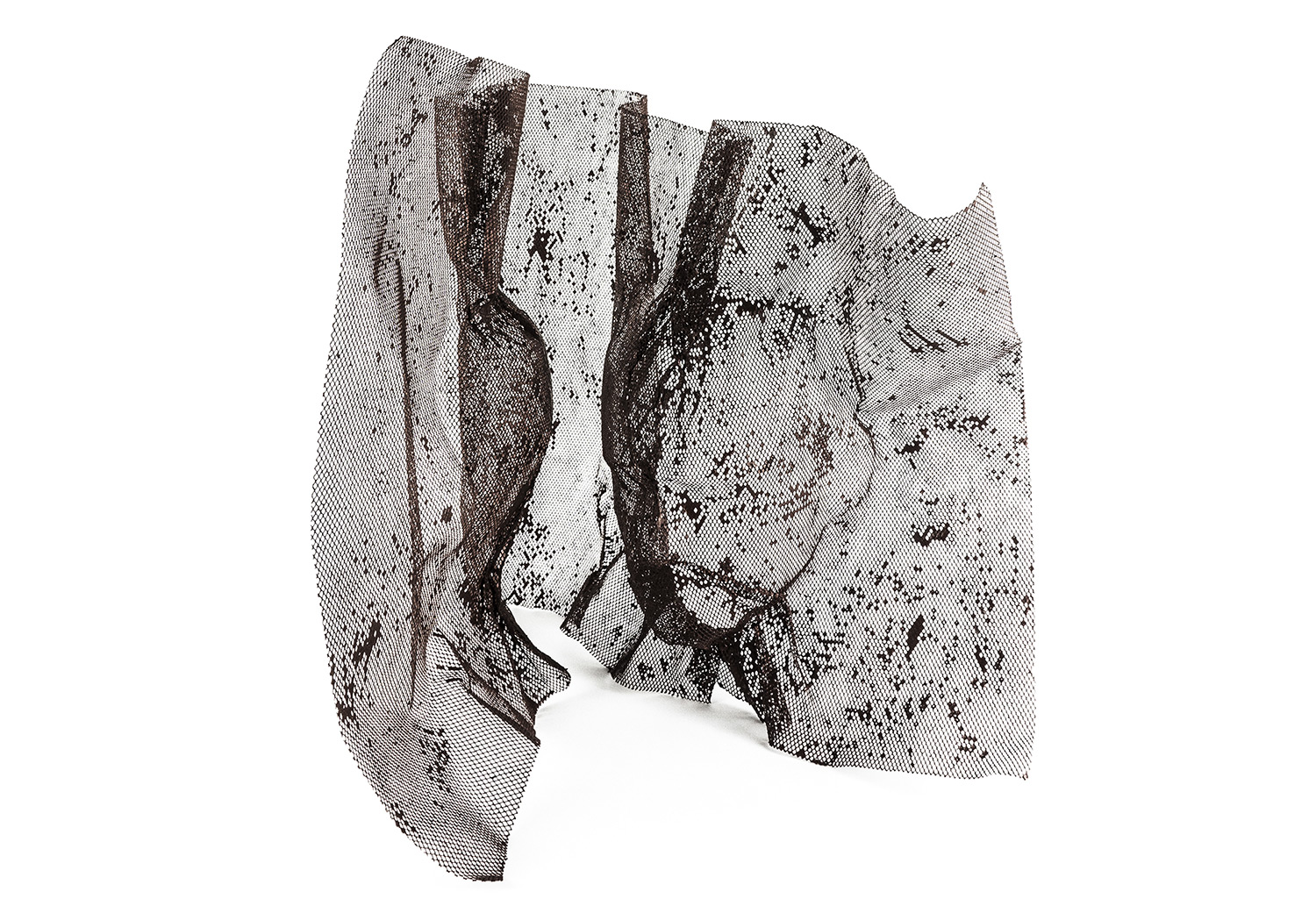 Behind Me, 2020, aluminium, emulsion paint

Looking at your works, one would think that architecture is your dream, the sinuous and soaring lines, the aesthetics, the possibility of daring and imagining the future. While art seems to embody reflection, reasoning, crack, ripple for you, your artistic point of view seems more aimed at the present and interiority. How would you define your relationship with these two aspects of your creativity?

The link is formed by interest and curiosity about constructed world. The perception that a designed object ceases to be inanimate and therefore creates a dynamic relationship with human. Architect can translate design into spatial object and through it influence people’s lives, mood and behaviour. This ability is the driving force behind creation, differentiation and innovation. The relationship with the organic and concepts of transformation, mutation and change could be seen as connection principle among these two fields. In my art practice this takes place through different methods of distorting, treating emotion itself as a power of distortion. Allowing for a degree of improvisation during course of execution, chance incidents activate work as diverse ways to express own presence in an effort to visually represent such distortions. 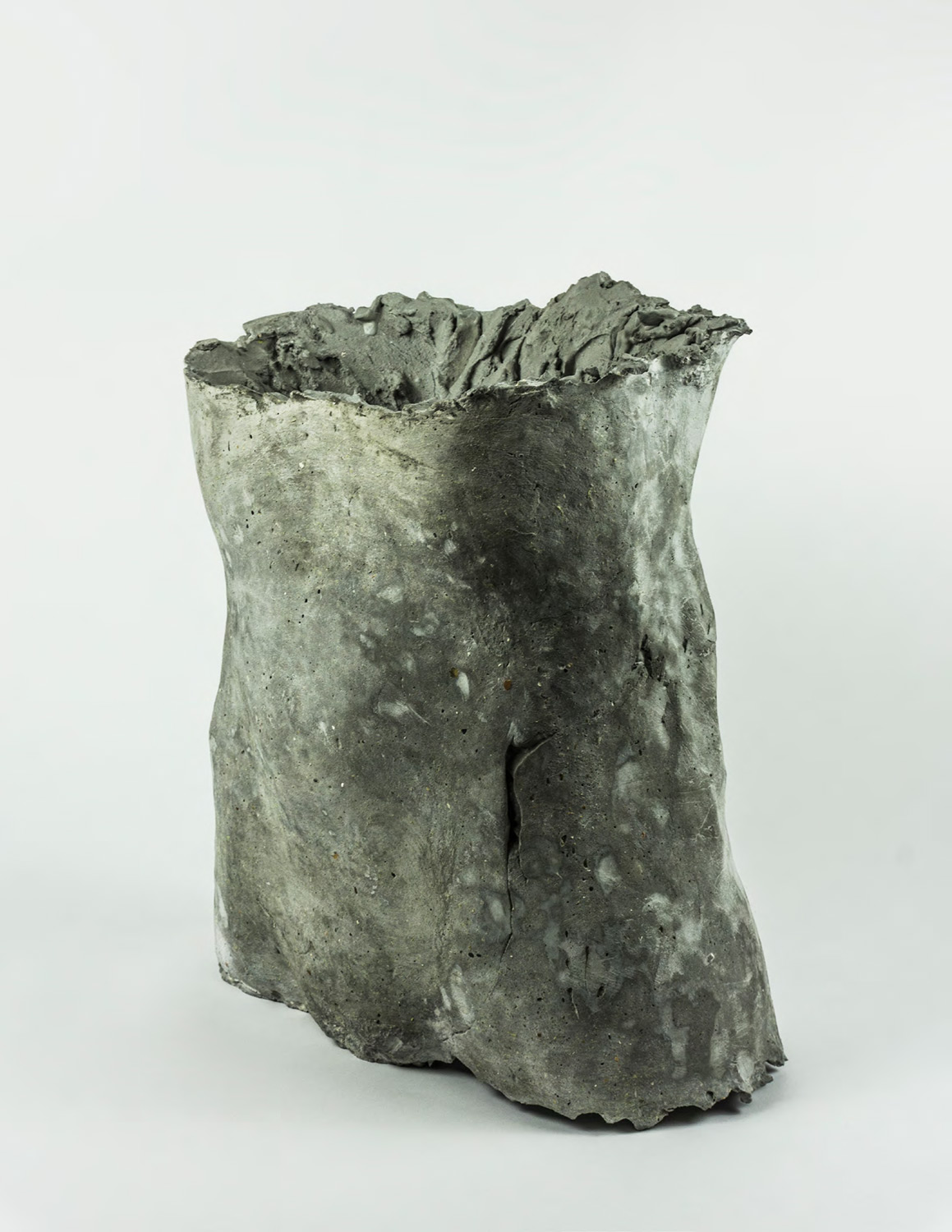 Corpus, 2020, sculpture obtained by sliding clay on the artist’s body

There is no doubt that your work as an architect has influenced that as an artist, especially in reference to the use of various types of materials (from metals to stone, from marble to clay, passing through plywood, concrete, cement, lead, etc.). It is clear that in recent years you have tried your hand more with materials to manipulate, to mix such as paper, mortar, clay. Have you felt the need to shape and model the material with your own hands?

Developing approaches to the diverse ways we inhabit the world, I am assimilating architectural design and construction techniques into the field of Fine Arts trying to strengthen the ties between sculpture and architecture. For me physicality reflects a notion of control and is a critical aspect of my practice. ‘Fight’ with the material is solidified to a tangible entity, which in turn becomes a container of repetitive and explorative actions. Maintaining an enduring preoccupation to find purpose in the procedure of interacting with matter my works solidify this personal relationship. Outlined by materiality and gestures, exploration of human activity is seen as an extension of self, aiming to provide an innermost insight into the artist’s creative exercise. Always preoccupied with the medium’s potential, artefact is used as continuance of the body, dealing with the link between myself and physicality of the object. I am interested in the way works possessing handmade qualities strengthen the relation with the human factor. 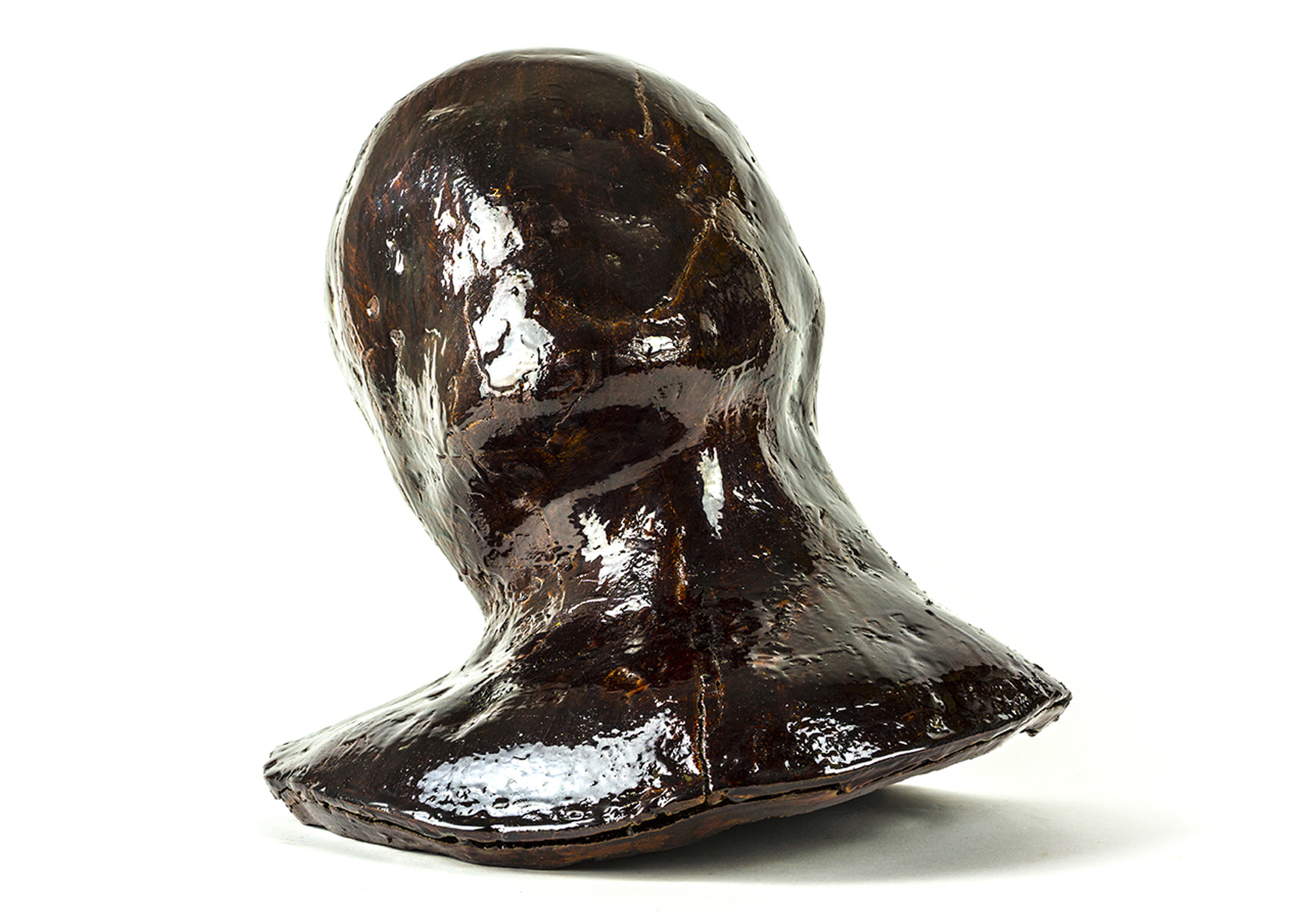 Your profession clearly influences your idea of space, in fact, you state “I consider that environment is not something static but is constantly reconfigured through its intercorrelation with people. I am concerned with the expressive and associative potential of art, perceiving artworks as fundamental spatial explorations, capable of describing experiences while manifesting their interrelationship to life”. So, in your opinion, are works of art a material externalization of interiority?

Material converts the intangible to tangible. Studying impressions generated by spatial relations allows me to describe the vibrancy of being as expressed by people’s acts. Performance-based artworks are concerned with the ‘making’ and how creator’s acts can be defined as the actual work of art, encapsulating its existence as a raw process, extensions of body movements. Retaining marks of working, emotion and frustration, I try through intimate pieces to intertwine the psychological with the physical, as surface and mass is traced by evident human resonance. Investing in the realm of craft, a hand in action highlights the sense of touch with the subject as personal traces of gestures are captured in the works providing evidence of individual identity and expression. As raw matter intersects with collision forces, accident informs the work accumulating time and actions into surfaces that are highly individual.

You say “the essence of who’s work lies in experimentation, exploration of emotion and the projection of identity in space” The face, the head, and the brain are recurring themes in your most recent production. By observing your works, you get the feeling that you want to understand and study thought by watching it on the facial features, monitoring and reporting the external effect of the production of ideas, and the emotions that thoughts arouse. And often your works are modelled on yourself. What do the face and the mask mean to you?

Face is treated as a carrier of identity and device of emotional projection. I am interested in the feeling of obscurity by evoking a sense of puzzlement through allegories, since the symbolically shaped can challenge limits of perceiving. Mask is seen as an instrument of distortion, standing as a portrait of its creator, allusive of concealment but also personal revelation. Instilling own physical presence into artwork, is a way to include creator’s consciousness in the final work. 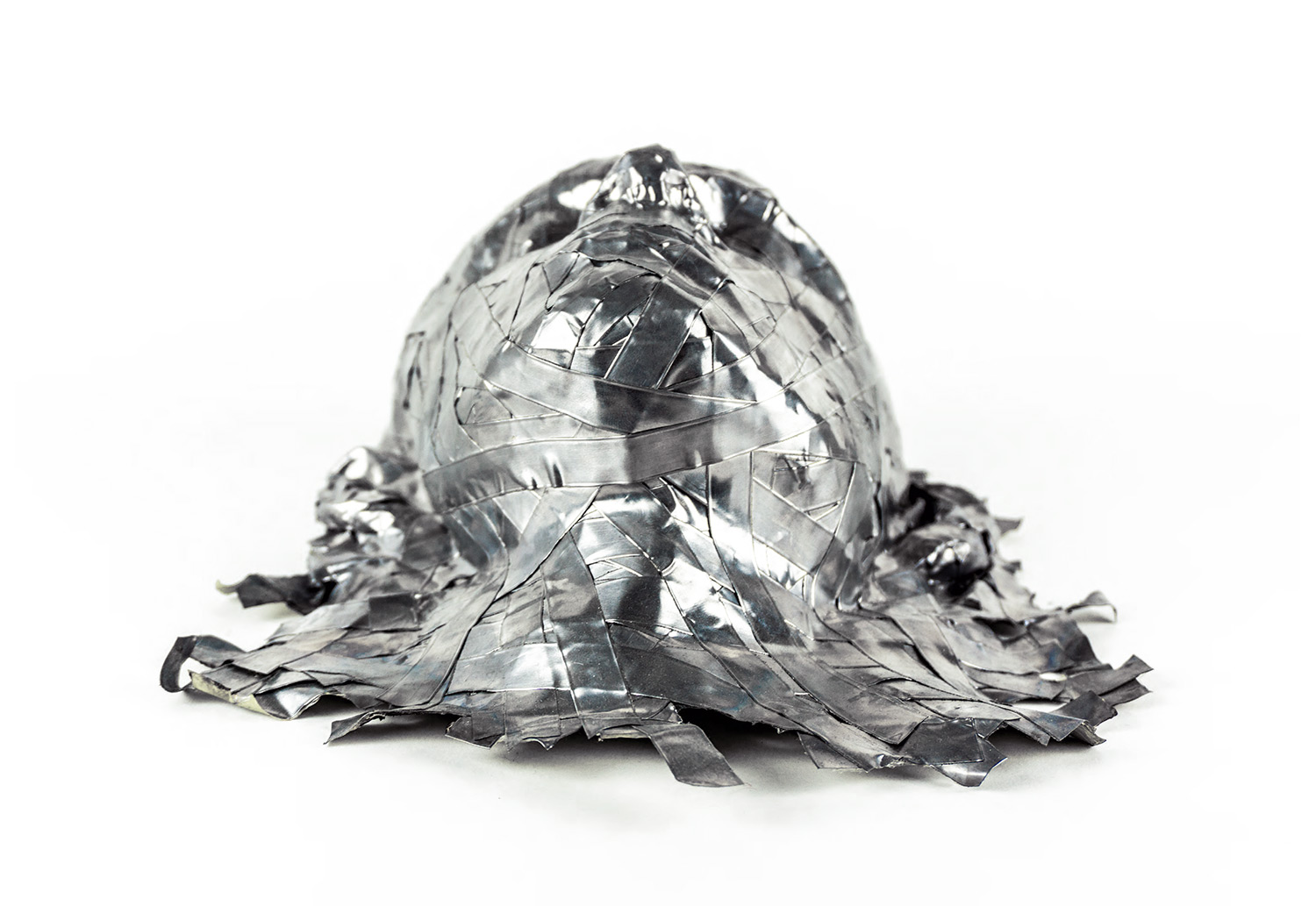 In the finalist work of the VII edition of the COMEL Prize you propose an original declination of the theme Aluminium Bonds, or rather the exploration of the link between a work of art and creator, which is then a topic dear to you. Imprinting your physical imprint on the work, binds it indissolubly to you, even when it will be in a completely different context, in another time. With the work Bond, you not only emphasize your presence through absence, but you refer to a period that was very difficult on a global level. How did the idea for this work come about? and then to enrol in the COMEL Award?

I perceive place as an extension of self. The space in which we live and grow sends countless stimuli and creates a form of communication with the relation being reciprocal. Individuals influence their environment to turn it into an effective receptor of own activities, as much as the environment itself directs or limits to specific responses. As I am exposed in diverse environments, gradual absorption of the habitual reshapes my identity fuelling work with such change. Affected by the pandemic condition, work produced during isolation reflects on emotional impact as experienced through artist’s creative process. The award coincided with the creation of work and I considered that both the idea and materiality behind it aligned with the theme. Aluminium is formed around the body to describe an active relationship with the material and seal the bond between body and work. Experiencing art as a physical act by allowing human form to inhabit inanimate objects, sculpture becomes disembodied presence.