WINNER OF THE AUDIENCE AWARD 2018

WINNER OF THE AUDIENCE AWARD 2018

He is a versatile artist whose creativeness spans from fine arts to music. He made his debut in 1994, as a self-taught artist, with the solo exhibition ‘Fabbricando’, a title that expresses his vocation. In fact, starting from his job, that puts him in contact with metallic materials, electricity, magnetism, he has immediately established himself as a ‘faber’. He has recovered this ancient denomination to imply experimentation and a profoundly alchemical curiosity. After a rich pictorial season, passing from iron filings, which he orientated with a magnet in a mysterious microcosm, he dedicated himself to the full-relief sculpture, in which the essential material, expressionistic, metaphorical components of his art are combined. He lives and works in Caltagirone (CT, Sicily, Italy).

You are essentially self-taught and make your debut with the solo exhibition ‘Fabbricando’. The choice of being ‘faber’ and a curios alchemist matches with the materials you feel closer, metals. Which experiences have been leading your artistic path? What sparked your interest in art?

Everything originates from a paper sheet and a biro…
Complex sketches depicting non-existent worlds are the protagonists of my first artistic life; with them I participate in exhibitions and illustrative works of art books, including La rosa senza perché, by Roberto Carifi and Giovanni Ruggeri (Città Aperta Edizioni / Servitium, 2004.)
All this naturally evolves with painting on canvas, exploring informal abstractionism.
Professional experience leads me to the study of electromagnetism. My painting changes, combining with unconventional materials such as iron filings, resins, cement, copper filaments. This evolution results in the definitive detachment from the canvas in favor of sculpture, working materials such as copper and stainless steel and copper-ceramic or wood-steel composites.

Is there any artist or current that you loved in particular to the point of being influenced by them or have you always followed an individual and free path?

I have always tried to think outside the box, exploring new techniques and themes; however, various currents have influenced me indirectly, among them De Chirico’s Metaphysics, Futurist Dynamism and several works such as the Tagli (slashes) by Lucio Fontana, or the floating dance of the infinite of the Dancing Satyr of Mazara del Vallo, a sublime work of an unknown ancient Greek artist. 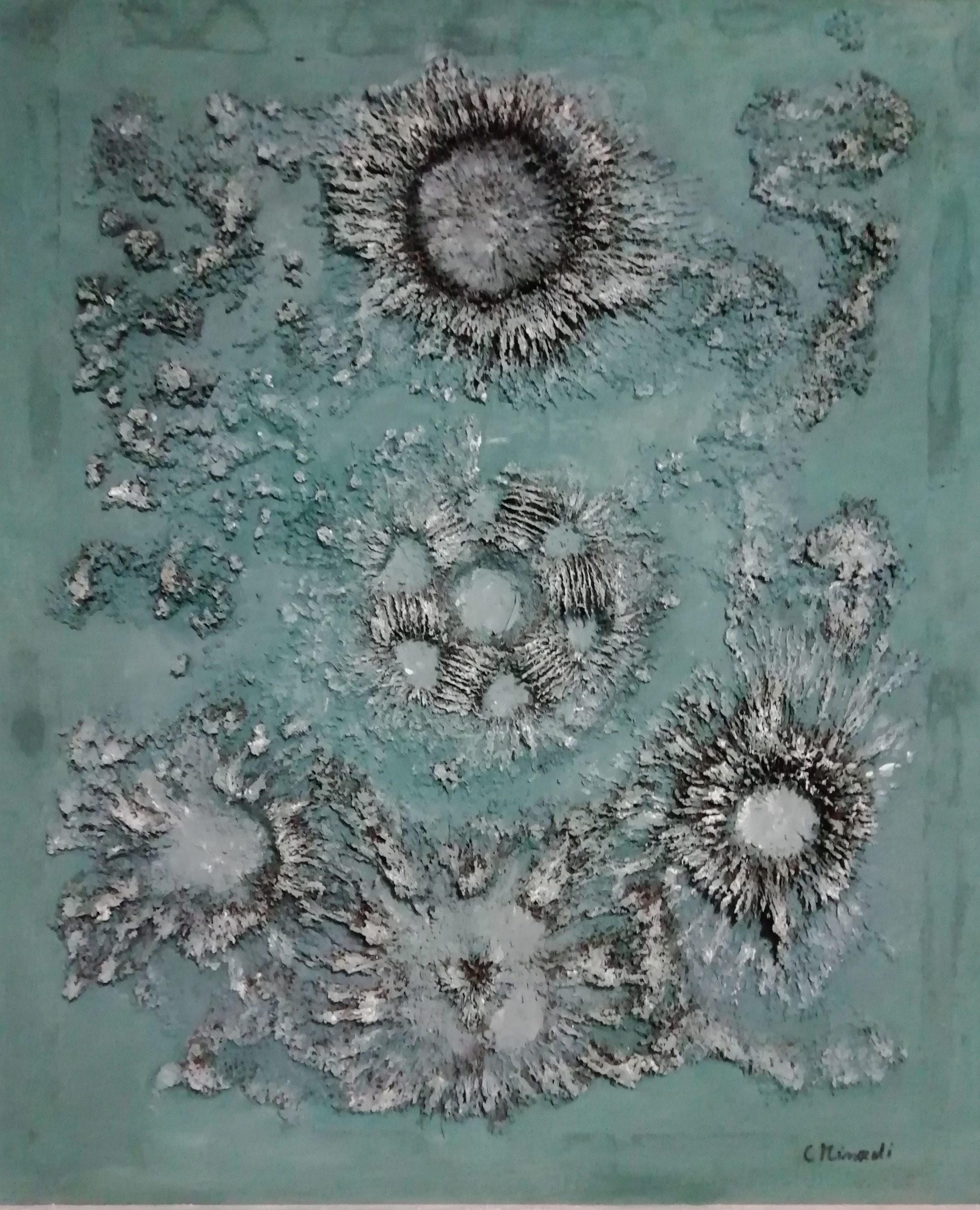 If you wanted to express a general objective of your artistic creation, what would it be? Why create art today? For an ideal audience? For an ideal world covered in beauty?

First of all, because Art is a human need regardless of contingent time. For me, the artist does not create for a defined and identifiable audience, but rather expresses his time, using technologies, tools, the media of his time. Art is beauty, it does not make things more beautiful but indirectly indicates or alludes to an ideal world of beauty.

Classic world and special effects of 3D cinema have been masterfully used for the creation of the work Musa spaziale (2018), an oxy-cutting technique on aluminum. Among the thirteen works selected for the COMEL Award, it received the Audience Award. Many have recognized not only the skill but also the elegance of the figure. Thus, the art critic Lorenzo Canova (in the jury) stressed in the catalog of the Prize how the fluidity and dynamism imprinted on the aluminum has allowed to elaborate a Muse able to cross space and time and whose anatomy is itself characterized by the speed of the path: “This figure re-emerges from the depths and from the memory; it then expands in the impact with the physical and temporal barriers of the universe. […] The aluminum becomes light and forms a luminous web of signs, a shining interweaving of vibrating threads that shape the absent body […]”. A Muse that crosses the infinite space, in search of the harmonic motion of life, this is its definition. Lightness and brightness, could we say that they are typical Mediterranean elements that become art?

Nature and its millennial history. Sicily with its light and its colors and its landscape, changing from place to place and from season to season; history with the classicism of forms and images, from Greek to Arabic culture and up to baroque and beyond. 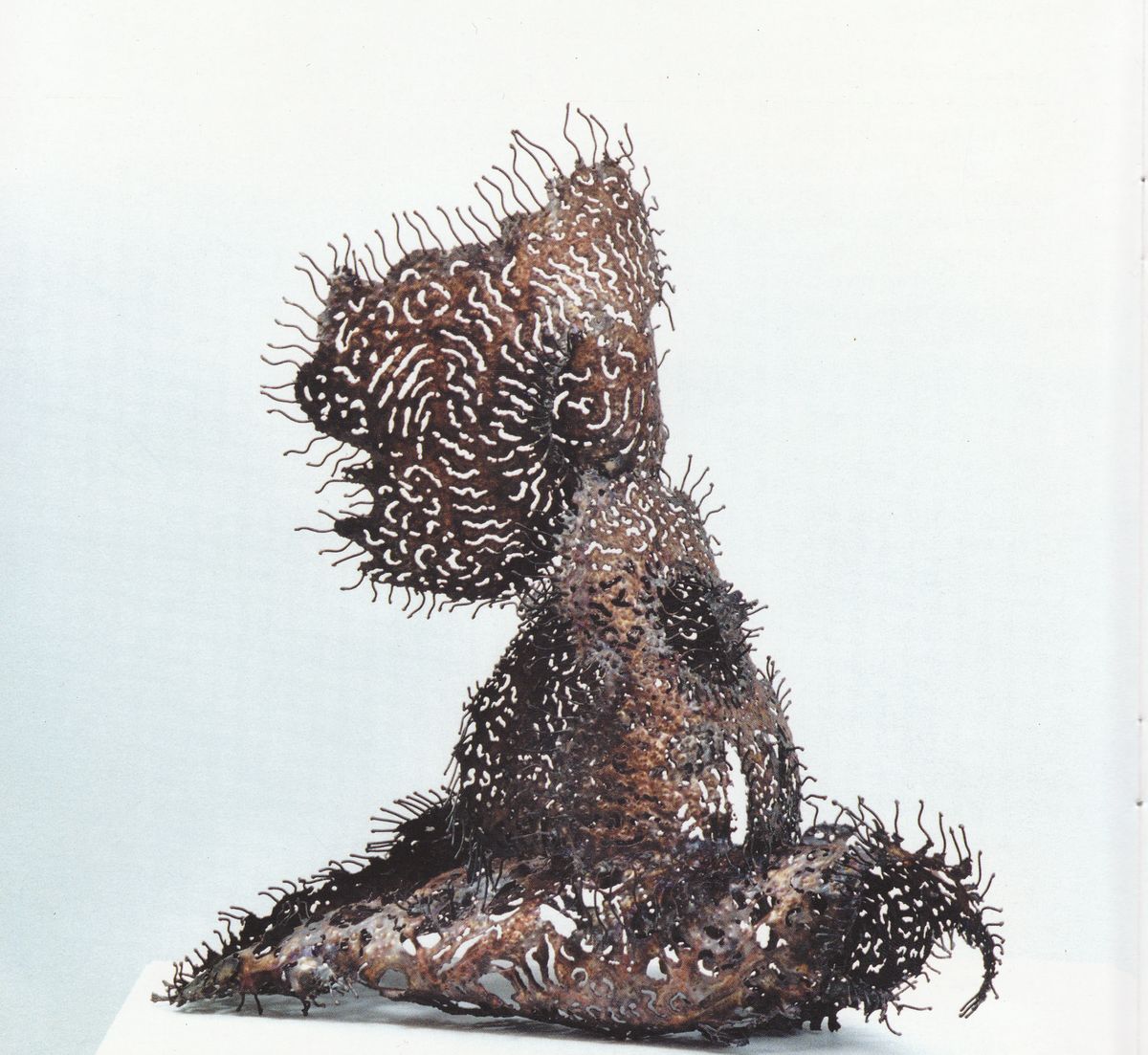 Let us now consider some of your recent experiences. Your work and your artistic commitment are deeply rooted in the territory you live and value in its cultural aspects; at the same time, you can reach very distant shores, to conquer them, even crossing the space (as with your Muse). It is no coincidence that your presence is strong in exhibitions and events that underline the richness of a region that has given and continues to give to the entire West. For example, the tradition of the Pupi is intertwined in some way with the Orlando Furioso and the Chanson de Geste. Sicily has recreated the characters of oral literature, has characterized them and made them land into everyday reality. So, even in your artistic production Astolfo, Orlando and Angelica were a source of inspiration. For them, on the occasion of the exhibition Talè – tales and flavors of the Mediterranean, you created the Orlando Garden, with large metal bodies transformed so lightly as to look like sheets. Tell us how your garden was born.

The Talè Project originates from an idea of friend artists, with the purpose of recreating a place where art and cultural roots immerse themselves in the flavors of the Mediterranean.
Here there are different environments that are inspired by the stories of the Sicilian tradition: Colapesce, Giufà, ‘Ciaula scopre la Luna’ (Ciaula discovers the Moon) and Orlando Furioso. The inspiration for the Orlando Garden was born from the latter, which I found particularly congenial to me and my artistic poetics for the possibility of an almost metaphysical story, placed in a context in which my sculptures can talk with the ancient plants, but also with the changes of the hours and the seasons.

I am almost accustomed to the beauty and history of my places; in the absence of all this, I am sure that my inspiration would diminish, because I believe in a strong relationship between creativity and my surroundings. 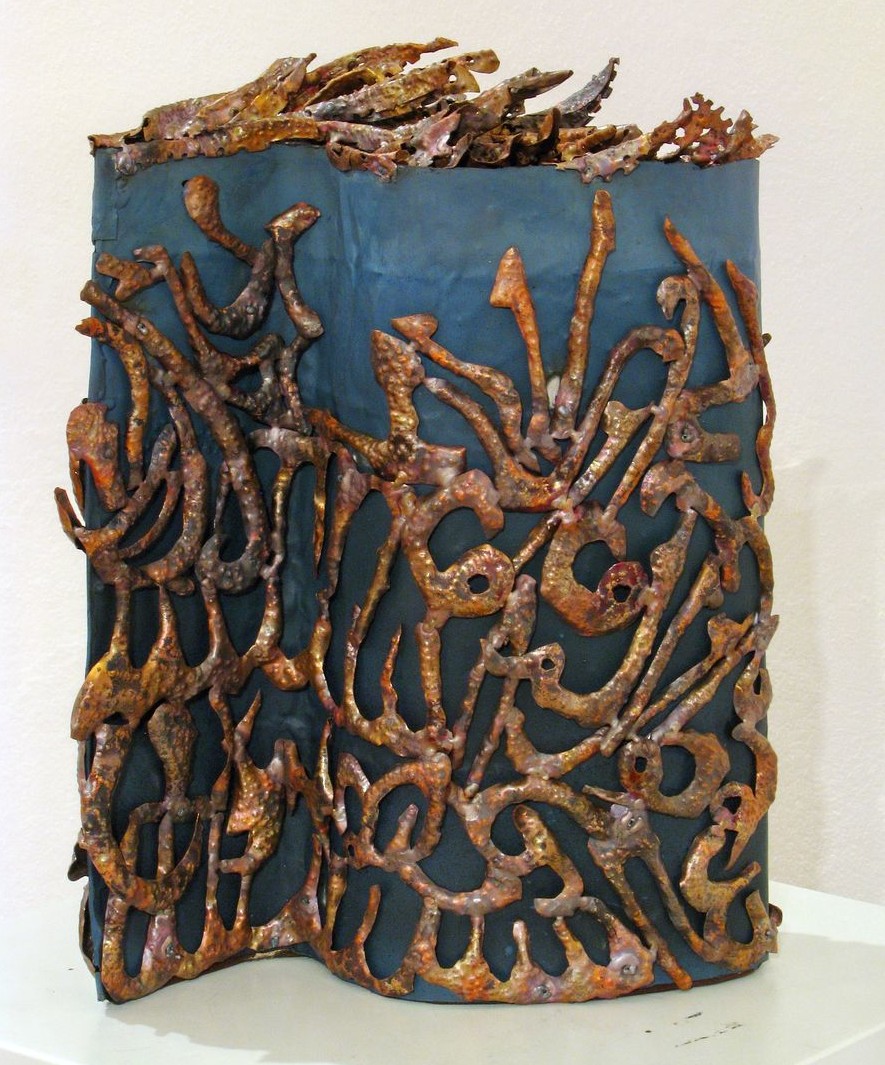 Still on this subject, you took part in the fascinating exhibition ‘Frontier of the East’, which saw the presence of Caltagirone artists. Behind this, the concept of Sicily as a frontier place, part of that classic and essential Orient from which the philosophical and cultural thought of Europe was born. The project was born for the proposal of Syracuse as European Capital of Culture 2019. Although not realized, this desire has created a series of events and reflections around Sicily as the heart of the Mediterranean. What was your contribution in this regard, with which work has it materialized?

For ‘Frontiers of the East’ I realized the work Migrants, in which, around an enveloping and sucking wave of desperate blue steel, the life and death of men escaped from hunger and violence, consumed in warm copper throbbing of feelings.

After the success at the COMEL Award, what are the next projects?

I can only unveil my hunger for experimentation, looking for new forms of artistic expression.