Skip to content
COMEL Award 2017: the winner is Rosaria Iazzetta

Proclaimed the winner of the sixth edition of the COMEL Award Vanna Migliorin Contemporary Art 2017: the artist Rosaria Iazzetta for the opera “Senza titolo, 2016”

Rosaria Iazzetta lives and works in Mugnano di Napoli (in the province of Naples). Professor at the Academy of Fine Arts in Naples, she has an international background, while remaining attached to her own native land, both from an artistic point of view and for her social commitment. She is an expert in metalworking, in love with photography and proactive slogans as symbol of cultural commitment. In fact, she is a narrator who uses metal to process new creatures, born from carcasses otherwise destined for landfill. Her contributions and international exhibitions between East and West are copious. Sculptor-craftsman, she prefers the welding process and considers the creation of a sculpture an ethical and emotional ritual.

This is the motivation of the jury:

“The work imposes itself for its strongly allusive design of anthropomorphic nature and for its specific and evocative metal work, molded and welded with great expertise. The final result is an original and humanized shape outlined in a dramatic and futuristic way.“ 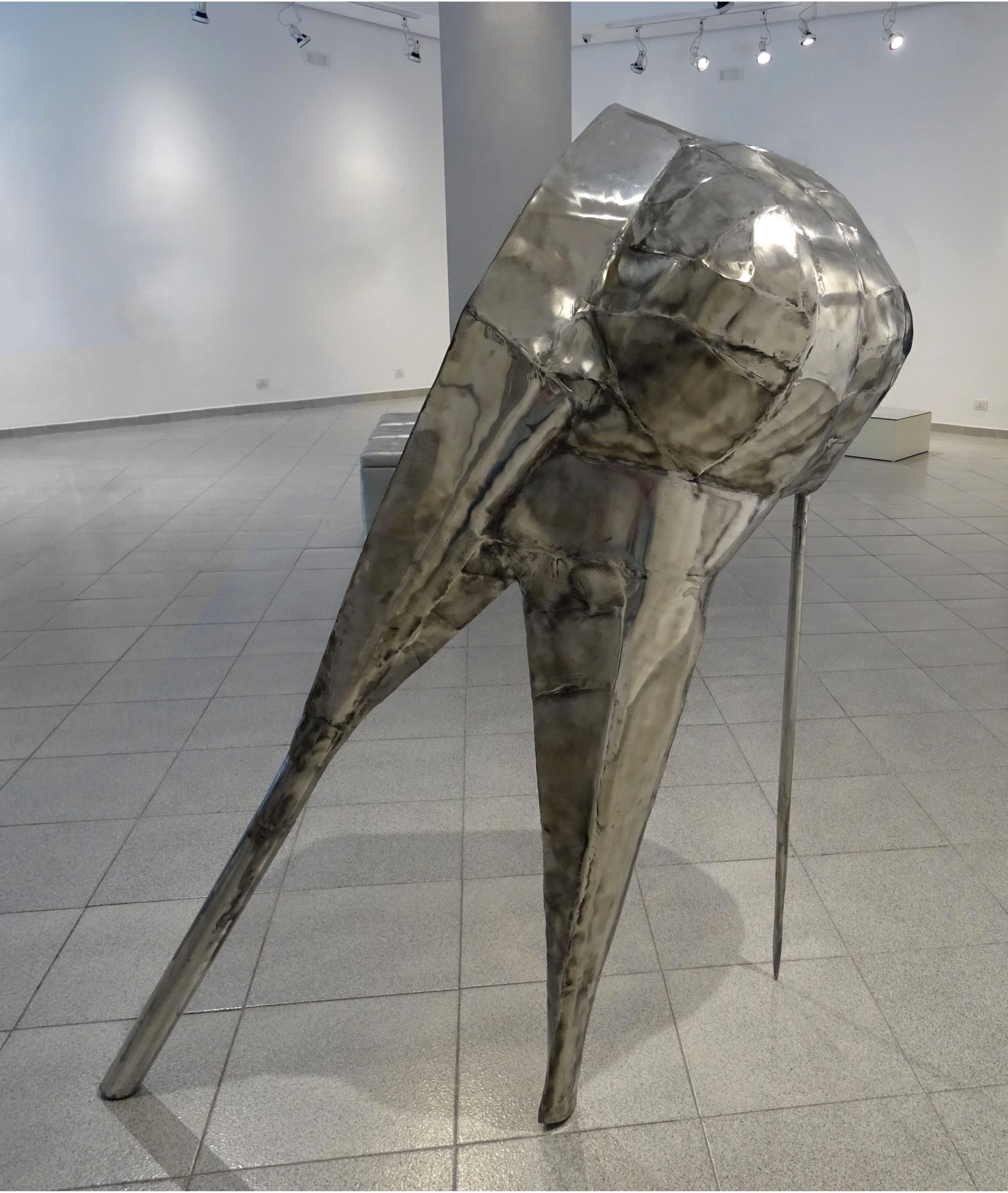 Lele De Bonis born in 1980, he lives in Turin and works as a stage designer for various companies in the fields of theater, cinema, amusement parks and outdoor scenery. At the same time, he has developed a personal artistic path focused on the concept of recycling and assemblage, through which he represents the most striking aspects of real life. Human being is the center of his work and he is almost always cynical and grotesque, but never condemned. He mainly uses wood and aluminum. Beyond the message, their constructive contrast allows him to play and experience endless alchemical relationships between hot and cold matter.

This is the motivation of the jury:

“The idea of the fragment as part of an all-organic and geometric feature characterizes Lele De Bonis’s work. The fragment of an evocative metal cube, placed alongside it, is exhibited as alteration and loss of a definite formal and psychic balance, but also as the principle of a new spiritual and expressive freedom.”

Lorenzo Galligani is a sculptor born in Florence in 1975, trained in Italy and Japan. He improved his technique working as a sculptor of stone and wood, with a preference for marble. He is an expert restorer. He has been involved in the restoration of prestigious works and has contributed as an artist and scholar to several university workshops as Visiting Professor (in Italy, Mexico and Japan). He is director of the Accademia Galligani in Florence. He models sculptures through traditional and handmade methods; a choice that he teaches his students, enabling them to develop a better knowledge and understanding of the necessary control of techniques to grow in their design.

This is the motivation of the jury:
“Thanks to a remarkable use of molten metal, Lorenzo Galligani recovers, the suggestion of classical sculpture within a strongly allusive context in a conceptual key. In fact, the work presents a peculiar signaling tension, perhaps referring to a psychological reflection, symbolically expressed in a naturalistic space.“

George King has worked as an architect on projects based in Australia, Europe, US, Middle East and Russia. George was founding director at design studio NEON, where he produced work for high profile clients such as Topshop, MONA, M&C Saatchi, Peroni and Hugo Boss. He was senior architect at Zaha Hadid Architects where he worked on the London 2012 Olympic Aquatic Centre, FIFA 2022 Qatar World Cup stadium, Central Bank of Iraq and Oxford University Middle East Centre. He has taught extensively, both at Undergraduate and Master’s level, leading programs at Lund University in Sweden, The Bartlett School of Architecture in London and Monash University in Australia.

This is the motivation of the jury:
“George King’s work is a suspended object capable of oscillating, capturing light and wind with astonishing visual effects. It is an installation skillfully realized by assembling identical elemental aluminum shapes that, as a whole, recall a sort of rotor capable of penetrating the space with subtle lightness.“